A dedicated volunteer group made up of Junior League Omaha members and community volunteers were up before dawn to staff the 2015 Omaha Color Run. One group in particular had signed up to volunteer months prior to the event, at the very first suggestion that there would be a glitter station at the end of the race. “The only three words I heard of the announcement were “glitter” and “Color Run,” so I picked up my phone and text the chair of the event. locking in my participation,” says Veronica Wortman, League member and station captain. “I think I sent the text before the chair was even done making the announcement.” 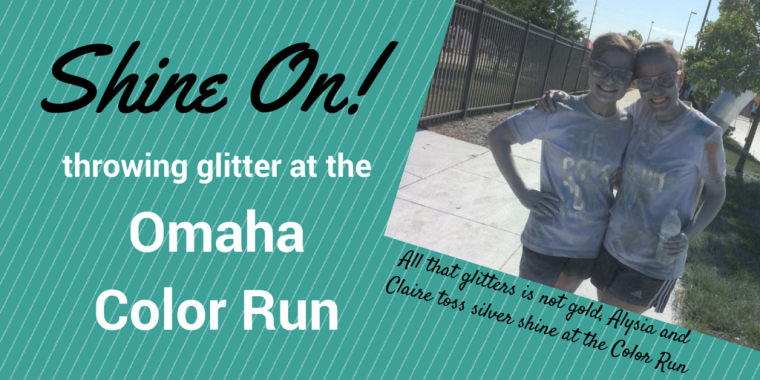 The Color Run is a traveling fun 5K run with a community purpose. In each city, a designated nonprofit organization receives recognition and financial contribution for supporting the volunteer staffing of the event. Known as the happiest 5K on the planet, the Color Run plasters runners with colored corn starch mixture as they run. The event ends with a short rave-like party where the gathered crowd is blasted with more color. The Color Run announced a new theme this year on their website. “The Shine Tour is designed to uplift and inspire runners to stand out from the crowd, sweat sparkles, and continue to live their lives in a happy and healthy way.”

Within a week all of the “Shine Station” volunteer slots were filled. Over the course of the five hour volunteer shift, 16 women tossed 500 pounds of shimmery silver cornstarch compound over runners as they crossed the finish line. Covered in shine, and resembling the Wizard of Oz Tin Man, the women recall memories created that day.

“I had a great time with the fellow Shine Station ladies.  I loved meeting some fairly new League members and catching up with some women I haven’t seen in a while.  I personally loved being covered in shine!  It reminded me of junior high when we’d slather ourselves with drugstore shimmer powder and jam to *NSync.” says Katie Triplett, League member and Shine Station volunteer.

“I would recommend bringing a SARS mask, hat and sunglasses. You’ll look ridiculous, but definitely worth it because really, it is about spending time with friends and making a difference to other in the community,” says Alysia Radicia, League member and Shine Station volunteer.  She also laughed when admitting that by the end of the event she had so much shine in her hair that she had a good idea of how she would look when she aged. “I know that I can pull off the silver-grey hair look, which is a life goal of mine.”

League member and Shine Station volunteer, Claire Stevens recalls, “We had an awesome crew and this was a wonderful way to fulfill a fundraising shift requirement for the League with a fun group of girls.” Following the Color Run rules of tossing color at runner’s torsos rather than faces, Claire realized quickly she had limited aim and ended up getting more silver shine on herself. “That’s okay, I have always wanted to look like a twilight vampire- dream fulfilled.”

The 2015 Omaha Color Run was an overall success. Check out the quick facts about the race in the below infographic.